Growing up in the United States, it never dawned on me how significant the differences were in the “material realities” of the world’s myriad geographic locations. I knew of course that places looked different one from the other. (It doesn’t take many elementary school slide presentations to convince you of that.) But what I didn’t grasp was how profoundly different they felt.

When you leave the United States for Europe, the differences in material realities are significant. More is made by hand. More is made by “materia prima;” i.e. a raw material used as the basis for production, and not itself processed. More is recycled. This is probably nowhere more noticeable than in many of the city streets. And Milan’s streets are no exception. 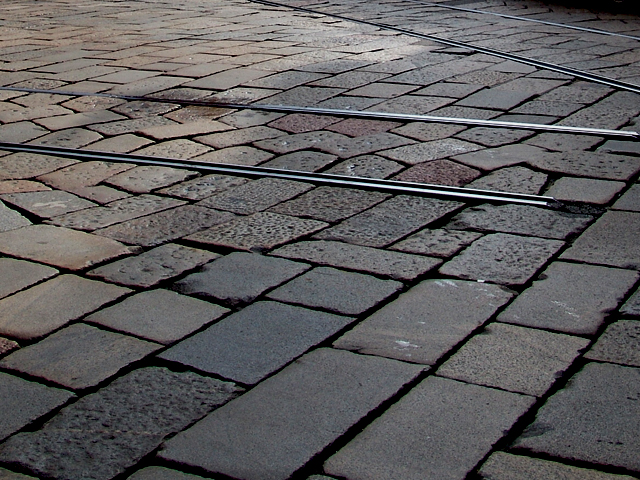 Many streets are still made with stone. I have seen entire blocks of cobbled streets torn up for reconstruction, their paving stones laid to the side like dominoes, each numbered on the bottom so that it can be put back in the proper position. There is a beautiful scalloped pattern used for streets and sidewalks, made from small blocks of vulcanic stone called sanpietrini (literally “little St. Peters”) as they are best known for their use in Saint Peter’s Square in Rome.

These methods take time and back-breaking work. But the results are exquisite. When I walk through this city, I walk on an ever-changing historical narrative, not on a modern, consistently skim-coated version of our human story. And as absurd as it may sound, this proximity to old and new human labor, to “materia prima,” gives me a grounding both literal and emotional that I would be loath to give up. The exact character of the stones and bricks which surround us can make us feel connected to or disconnected from our own human past. I personally do better in an environment where the surfaces are not treated superficially.

The world is short on beauty. And beauty softens the harshness of what so many people are forced to endure. If even the streets can be kept lovely, so should they be.

Like Loading...
This entry was posted in AROUND US, ITALY and tagged cobblestone, Italia, Italy, Milan, MIlano, sanpietrini, strade, street. Bookmark the permalink.

5 Responses to The beautiful street