The staff of Italian life

A quick note to my readers: As you may have noticed, I’ve not been around much in the last few months, even announcing once or twice that I was “back” when in reality I wasn’t. That was wishful thinking blogging on my behalf. Suffice it to say that my family has been through a longish health ordeal which has ended happily. (Enough said.) I can’t promise that the Daily Cure will be—as it once was—daily. But I am, finally, able to turn my attention once again toward those small things in life that give so much pleasure. In fact, fully appreciating them seems a fitting way to give thanks.

It seems a cliché. But it’s true: pasta is at the center of life here right next to family and conversation-as-an-art-form. And it happens that whether you choose fresh pasta (pasta fresca) or dry, packaged pasta (pasta asciutta) is not so much a matter of economy or culinary sophistication as it is a matter of taste. They are different. They absorb different sauces differently, as do different pasta shapes. And they exalt* different ingredients differently. In the mood for white truffle? Shave it over a fresh egg pasta, tossed lightly in butter. More in the mood for olio, aglio, peperoncino? My preference would be dry spaghetti.

Inside the dry pasta category, the Italian market is saturated with different brands, but two giants dominate the field: Barilla and De Cecco. Barilla, known and available the world-over, is low on my personal list of favorites. De Cecco, omnipresent in Italy and available in some U.S. supermarkets the last time I shopped there, is much higher. Why? Because of the way they cook. Barilla absorbs water over the cooking time (tempo di cottura) such that when the exterior is just right, the interior is al dente to the point of crackling. When the interior is right, the exterior is soggy. I find that De Cecco allows for a more even absorption of water giving one, in the end, a degree of al dente consistent through the thickness of the pasta.

Detto quello—that said—there are two smaller brands on the march, which have won my heart and stomach: Garofalo and Rummo. 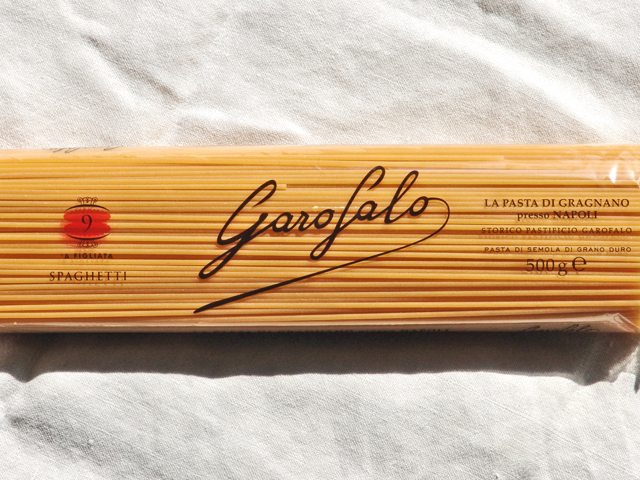 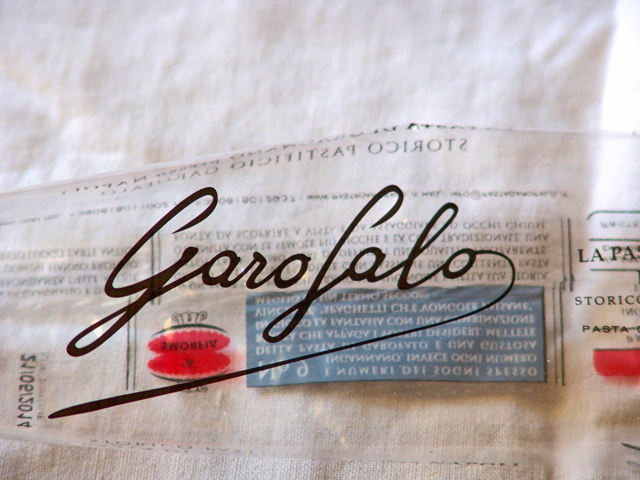 Garofalo has found the balance between what appears to be an artisanal product and a sophisticated graphic approach to its packaging and marketing that I find difficult to resist. When you like a cellophane wrapper as much empty as you do full because of the typography it wears, that tells you something about the power of the designer. But we mustn’t fault Garofalo for realizing that pasta, tradition, and goodness in the plate are sexy. They’ve let us have all three with an excellent product adorned by a cool, black script. And it’s not, in this case, smoke and mirrors. It’s families-old tradition swathed in modern sensitivity.

Not to be outdone, Rummo is claiming its place too. Quietly, confidently, with perhaps a more serious outward link to the way things have always been done in Benevento, outside Naples. Five generations of Rummo’s have worked the wheat that grows in the fertile ground of the Sannio and Calore Rivers. And they’ve married the family name to their signature process, Lenta Lavorazione (slow processing). This term has to do primarily with the extended kneading time of the pasta which exalts (there’s that word again) the inherent qualities of the wheat, but which speaks also to an underlying “slow” philosophy in food, life and all things worth savoring.

Rummo’s website features lovely, clean expanses of white with simple displays of the 96 shapes of pasta they produce—each named and numbered. All the pasta companies name and number their products, but there is something about the purity of Rummo’s presentation that says a thousand times “love.” These people love pasta. They respect it. They feel uniquely privileged to produce it. 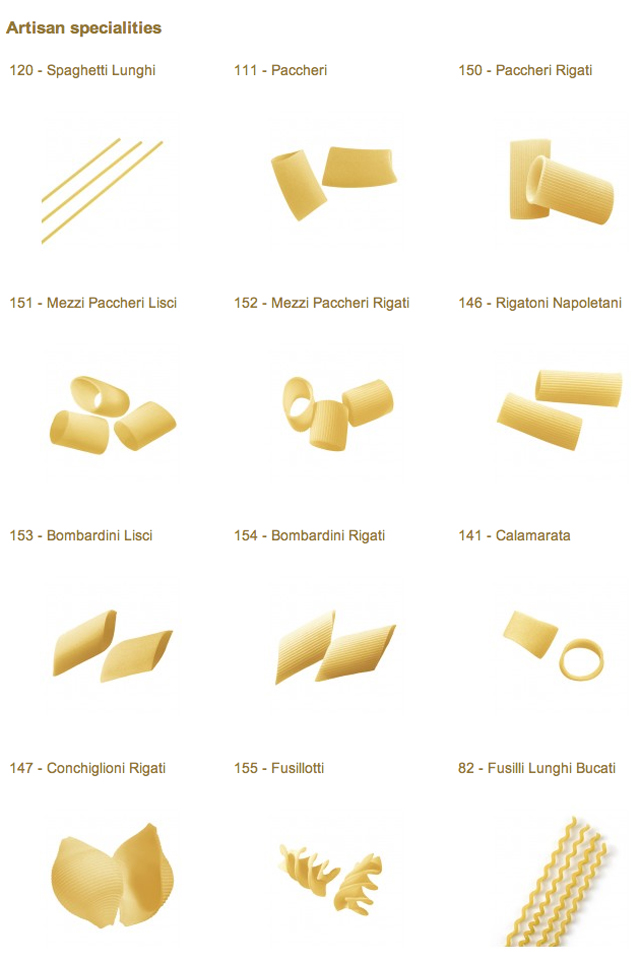 Rummo’s seriousness appeals to me. But I have to applaud the well-placed wit of Garofalo: Instead of printing a bland cooking time on the Italian package, they suggest the number of minutes required for ‘a figliata, which more or less means “birth.” Spaghetti and its extended family aren’t cooked, my friends. They are brought to light. Born. Given life. And in turn, they do the same for us. One fork-full at a time.

*Exalt: Italians love to use this word when discussing food. To my ear it has an archaic, Biblical ring to it. But I’ve grown to love it, as good traditional food requires our deepest reverence and the most rigorous mining of our poetic resources to do it justice.

[If you enjoyed this post, you might also like “Salt” in which it is revealed that one should never forget to put adequate sea salt in the pasta water!]

11 Responses to The staff of Italian life