Monique and I walked down the street, eating tomatoes like apples. We each had a big one so sweet and juicy that there was no other alternative. Juice ran down our chins and fingers until there was nothing left. I can’t tell you what year it was or where it happened, because what my mind recorded was the important part: the tomato.

When I was little, my grandmother served tomatoes at every meal. This was way before hydroponic and mass production, and the tomatoes tasted like tomatoes, but also like earth and summer. My favorite lunch was tomato sandwiches. Who needed protein when there were beefsteak tomatoes ripe for the picking, mayonnaise, and two pieces of bread, humble servants, ready to receive them.

I suffered when I left the South and had to content myself with hydroponics. These tomatoes looked like tomatoes; in fact, they looked too much like perfect tomatoes. They were too red, too firm and too round. Watery pulp. I was disgusted that they could sell you something that looked like food but betrayed every sweet, visceral memory you had of the way that particular food was supposed to be. Real tomatoes were a meal unto themselves. Real tomatoes weren’t uniformly red, but splotchy and lumpy like miniature pumpkins. Real tomatoes had streaks of green and patches of yellow, and often the uglier they were, the better they tasted. Real tomatoes blew you away with their earthy tomato-y-ness.

Italy has restored my faith in the tomato, and, if such a thing were possible, raised it to a new level. When I moved here, my mother-in-law, Nicole, who was a goddess of the domestic arts, dedicated a week every summer to making and preserving the tomato sauce that would last all year. She bought crates and crates of tomatoes—pomodori piccadilly, I think. Oblong tomatoes with flirtatious little points at the ends, ideal for making sauce. Ripe, ripe, ripe. Bursting with flavor. Dense on the inside and low on seeds. She and Roberto, her faithful helper, would labor over tomatoes, steaming pots, grinders and cheesecloths, until hundreds of glass jars of sauce, with and without basil, were put up for the winter months. This labor of love took place in the torrid heat of August, under a canopy of wistaria. The cheesecloths, heavy with tomato sauce, hung over witch sized cauldrons, dripping and dripping, suspended from the beams of the pergola. The sauce slowly became more of a paste. Flavor, intensified and pure.

We lived on Nicole’s tomato sauce for years, never tiring of its flavor. But when Alzheimer’s rendered even the completion of her beloved annual tomato sauce production impossible, we turned to commercial alternatives. During this same period of time, we often had the pleasure of lunching with Roberto and his wife, Graziella, in their cozy kitchen. Graziella didn’t believe in sauces. She believed in tomatoes! She would pick them off the vine, chop them up, and throw them into the sauté pan, making her sauces on the fly. Seeding and skinning? Forget it!

Now, quasi sempre (almost always), Graziella’s method has become mine. Sometimes, even before I have a fully formed idea of what the meal will be, I’ll have olive oil, garlic, sea salt and tomatoes working their unfailing magic over low to medium heat. They can cook for a little time or a lot, depending on your schedule and/or your palate. And you can dress them up and down with a variety of additions. You can add onion (in this case, sauté the chopped onion first). You can add capers. You can add capers and olives. You can add basil. You can add anchovies in place of salt. You can add peperoncino, red pepper. You can eschew garlic, and let the brilliant sweetness of the tomato sing solo. 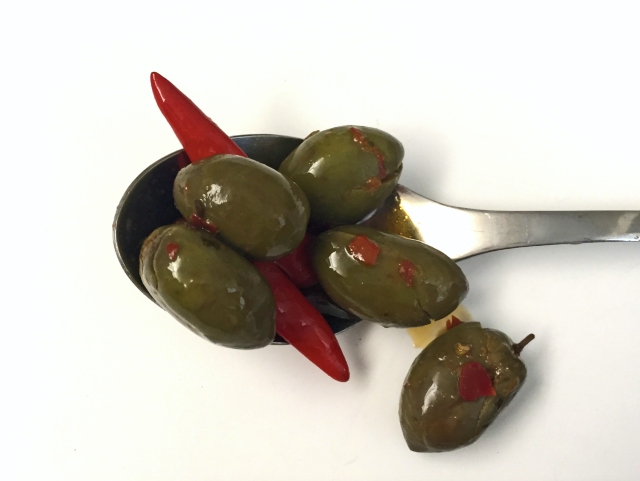 Lately, and quite by accident (my husband simply made use of what was in the fridge), we’ve been loving a new version. To the usual fly-by-the-seat-of-your-pants sauce made with oil, a smashed clove or two of garlic and tomatoes, I add crudely chopped olive schiacciate, smashed spicy olives preserved with peperoncino (above). If you can find them, or something similar, remove the pits, cut them up, toss them into the pan with the tomato base, then let the ingredients do a brief tango over a medium flame. Throw in the almost-cooked pasta of your choice, letting it perfect its cooking inside the juices of the bubbling sauce.

(Funny how heat loves heat. Here we are with temperatures rising, and what we want is more spice in our mouths. The bright acidity of the tomato keeps it seasonally relevant.)

This mixture simmers in the pan and fills your house with the smell of goodness. Appetites rise to the occasion and flock to the table. Something is happening, and it’s happening fast. No time to dilly dally. Time to fill the plates with steaming yumminess and dig in. 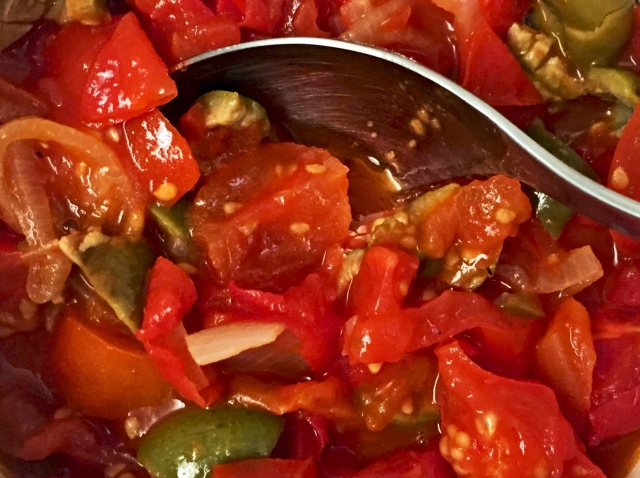 In our house, tomatoes and their derivatives have two other best friends. Sweet red onions—cipolla tropea—and green beans.

Green beans also remind me of the South, where they seemed to be accompaniments to every meal. Of course, then, they were cooked for more time and maybe even with bacon fat. In Italy, Nicole would cook up a huge pot of green beans on a summer morning, in nothing more than salted boiling water, taking them out and rinsing them rapidly to preserve their greenness. We would then munch on them all day, fitting what was left into our meals and salads. But fagiolini, or cornetti, deserve a space in this post because of how brilliantly they play the straight man to tomato’s funny girl. Often, when we are in the mood for a legume/cereal combo in place of fish or meat, I’ll take the already boiled beans and sauté them together with the olive oil, garlic, tomato, onion mixture I have perfecting in the pan. The flesh of the beans absorbs the sweet acidity of the tomato, and together, they make a light, savory dish. I don’t use this mixture to dress pasta, but serve a simple pasta on the side (such as olio, aglio, peperoncino), or a farro (spelt) salad.

When time is short but tomatoes and red onions are plentiful, we simply slice them and throw them on a plate with a proper vinaigrette. No cooking, no fire, just the essentials. Perfect ingredients, left alone, doing what they were created to do: satisfy.

I hope you have a glorious and flavorful summer. 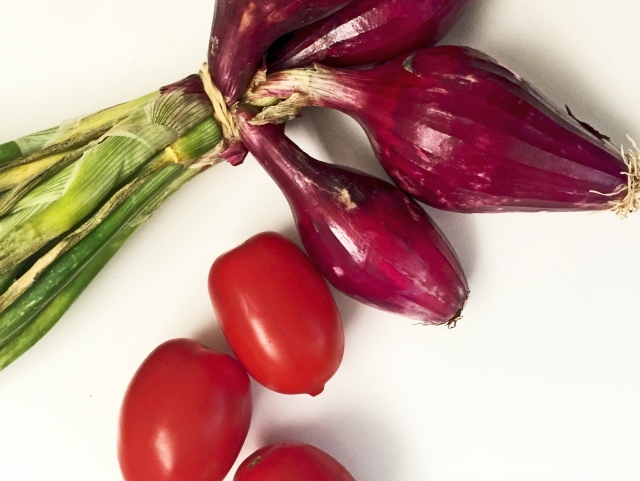 Like Loading...
This entry was posted in IN SEASON, ITALY and tagged green beans, Italy, pomodori, red onions, tomatoes. Bookmark the permalink.

24 Responses to Tastes of summer