The list of adult books I would read over and over (and over) again is not long. It includes Iris Murdoch’s The Sea, The Sea. Virginia Woolf’s To the Lighthouse. And The Worst Intentions by Alessandro Piperno. But the most loved of my dog-eared reads is The Periodic Table by Italian chemist, Primo Levi.

When my husband first gave me this book, my eyes rolled back in my head. A book about chemistry? Impossibile. I liked chemistry in high school, but I haven’t always enjoyed reading what scientists have written. String theory fascinated me (still does), and The Elegant Universe was a seductive title, but somewhere around page 150, I put it down for more tangible fare. Thus are my mind and heart: slightly fickle, definitely flawed and marked by a certain attention deficit. Primo Levi grabbed both my heart and mind with this poetic memoir and never let them go. 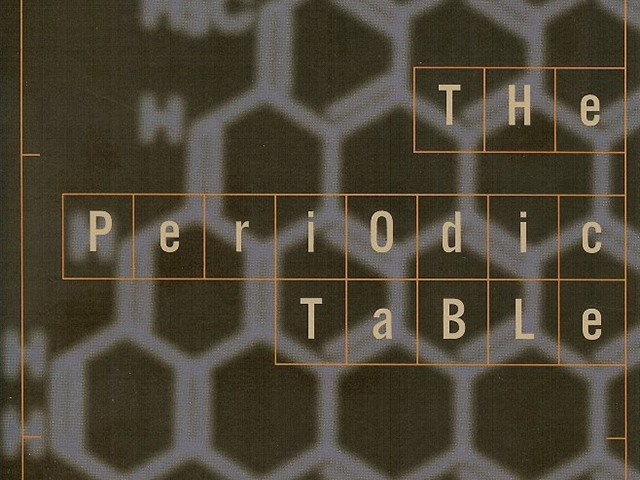 Levi tells significant parts of his life story through a series of essays, each based on one element of the periodic table as a metaphorical inspiration or a concrete point of departure. In this manner he forays into “elements” of his own being. Growing up Jewish in Turin. Being a prisoner of war (he was arrested for resisting Fascism). Surviving Auschwitz. Making his way through the field of chemistry. And falling in love. Not once does his science overwhelm his human-ness. Not once does his knowledge, so much greater than mine, taint his voice, or lead to off-putting academic virtuosity. He talks about life and reality with a steady hand on the emotional rudder and a bottomless reserve of sensitivity. He lived the life of a scientist, objectively observing the behavior of matter. And it is in the same fashion that he observes all the acts—both beautiful and beastly—both personal and universal—of human life and nature. It’s time to read it again.

In school they loaded with me with tons of notions that I diligently digested, but which did not warm the blood in my veins. I would watch the buds swell in spring, the mica glint in the granite, my own hands, and I would say to myself: “I will understand this, too, I will understand everything, but not the way they want me to. I will find a shortcut, I will make a lock-pick, I will push open the doors.”

It was enervating, nauseating, to listen to lectures on the problem of being and knowing, when everything around us was a mystery pressing to be revealed: the old wood of the benches, the sun’s sphere beyond the windowpanes and the roofs, the vain flight of the pappus down in the June air. Would all the philosophers and all the armies of the world be able to construct this little fly? No, nor even understand it: this was a shame and an abomination, another road must be found.

In order for the wheel to turn, for life to be lived, impurities are needed, and the impurities of impurities in the soil, too, as is known, if it is to be fertile. Dissension, diversity, the grain of salt and mustard are needed: Fascism does not want them, forbids them, and that’s why you’re not a Fascist; it wants everybody to be the same, and you are not. But immaculate virtue does not exist either, or if it exists it is detestable.

Sandro was surprised when I tried to explain to him some of the ideas that at the time I was confusedly cultivating. That the nobility of man, acquired in a hundred centuries of trial and error, lay in making himself the conquerer of matter, and that I had enrolled in chemistry because I wanted to remain faithful to this nobility. That conquering matter is to understand it, and understanding matter is necessary to understanding the universe and ourselves: and that therefore Mendeleev’s Periodic Table, which just during those weeks we were laboriously learning to unravel, was poetry, loftier and more solemn than all the poetry we had swallowed down in liceo; and come to think of it, it even rhymed!

The trade of chemist (fortified, in my case, by the experience of Auschwitz), teaches you to overcome, indeed to ignore, certain revulsions that are neither necessary or congenital: matter is matter, neither noble nor vile, infinitely transformable, and its proximate origin is of no importance whatsoever. Nitrogen is nitrogen, it passes miraculously from the air into plants, from these into animals, and from animals into us; when its function in our body is exhausted, we eliminate it, but it still remains nitrogen, aseptic, innocent.

Thanks to Wikiquotes for the citations. Wikipedia also provides an excellent summary of book.

Like Loading...
This entry was posted in ITALY, SO NOTED and tagged chemistry, elements, Fascism, humanity, literature, Primo Levi, the Holocaust, The Periodic Table. Bookmark the permalink.

2 Responses to My Primo love