Just tossing something together

As destiny would have it, the year before I moved to Italy I bought a book called 100 Pasta Sauces. I don’t remember actually making anything out of the book, but I do remember thinking, “A hundred. Hmm. That’s a lot.” And so it is. Though I’m sure the number of sauces used in Italy far outstrips the number in the title. In part, I say that because there are a countless number of traditional and regional sauces. But I also say it, because I know that a good deal of imaginative interpretation is allowed along the way.

There are sauces I’ve heard of, but have never dared to make or taste, among them a sauce based on tuna and beet root. (This does not appeal to me at all.) There are pasta dishes that, beside the pasta itself, are based on practically nothing substantial, but which are full of flavor. I suppose the most famous of these are olio, aglio, peperoncino and puttanesca`—both lovely savory standbys for when you have “nothing” in the cupboard. On the island of Panarea, I had the pleasure of eating a pasta a cinque sapori which I’ve never forgotten, but whose main ingredients I never managed to identify. The mystery of the potent mix only added to its intense appeal. 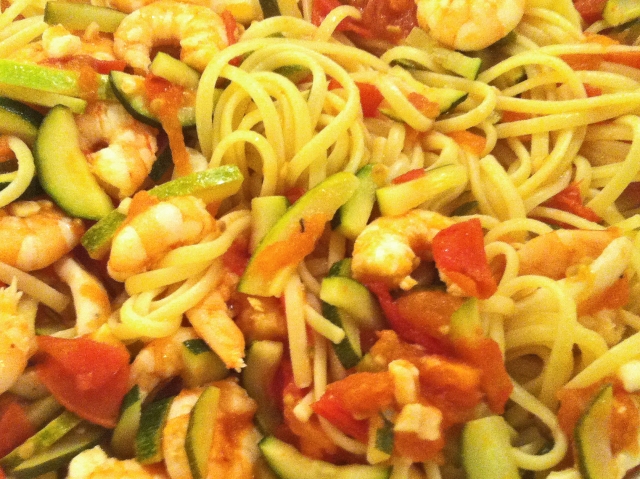 Eating Sicilian pastas for the first time literally blew my mind. Who would have thought you could make a sauce out of sardines, anchovies, wild fennel, pine nuts, bread crumbs, and raisins? Who? And yet it is divine. Complex and satisfying. Evocative of what you imagine a Mediterranean life to be full of—even if, in reality, it’s not. Sea. Sun. Salt. Satisfaction.

My favorite pasta sauces these days involve ingredients saltati (sautéed) briskly, almost carelessly in a hot pan, in which the extra al dente spaghetti or linguine are added at the last minute for one final taste-melding toss. Case in point, the above: fresh sliced calamari with scampi, garlic, the green of the zucchini cut in slivers, white wine, fresh tomato and an assertive sprinkling of peperoncino. The time it takes to boil the water and cook the spaghetti is more than enough time to make the sauce. Maybe even too much. Fifteen minutes, and your meal is ready. Eat it hot. And marvel at its beauty.

3 Responses to Just tossing something together