One of the things I’ve said over and over about Milan, elsewhere, is that it’s not a typically beautiful Italian city. Not beautiful the way Rome is beautiful. Or Venice. There is a lot of beauty here, but it’s confined to certain areas, or it’s hidden inside courtyards you’ll never enter, or it has to be discovered in situ, cheek by jowl with the far less glamorous. But this act of discovery binds one that much more tightly to the city. Its jewels are hidden, and one who finds them feels richly rewarded. 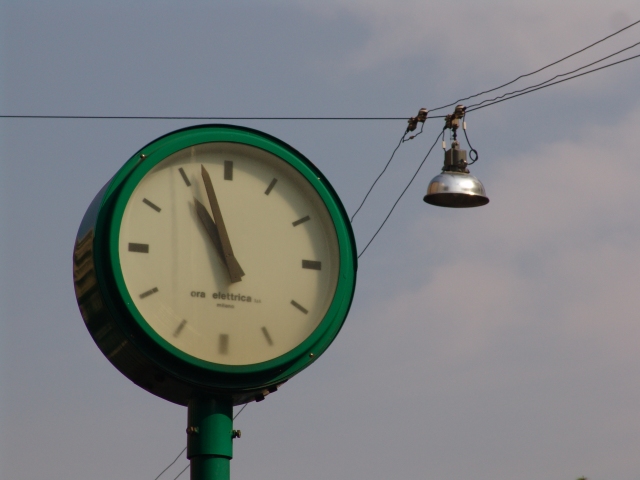 Beyond that, as with any city (or person for that matter), one realizes that there are elements of beauty that grow out of character. Things that at first glance seem unimpressive grow to be beautiful to the observing eye.

Italians often refer to Milan as a working city, and as such there is a functional honesty to Milan that is not in evidence in other Italian cities. Two of the features that have always embodied this aspect of Milan for me are its street lights and its clocks. I have always loved them, have always felt that like the eyes of a person, they were somehow the windows to the soul of this city. Hints that despite the ornate, the historic, the war-damaged, the sleekly and chicly modern, there is a beautiful and timeless functionality at the core—the heart—of it all.

Like Loading...
This entry was posted in AROUND US, ITALY and tagged clocks, Milan, MIlano, streetlights. Bookmark the permalink.