Elba is behind us now, a small green, ink splat in the Mediterranean that holds a special place in our hearts while the city of Milan and Life (again with a capital L) make other demands of our attention. And yet, and yet, it is hard not to “go back” on the mental ferry that shuttles one at no charge back to the memory of easier times and long hot days.

There were many things I could have written about the lovely Island of Elba, but I confess that time, oddly was short. When you’re busy trying to relax, the hardest thing to do is find time to do something that you’re supposed to do, even if it’s a self-assigned task that you love. It’s counter to your nature, your intuition. And when the internet connection is slower than slow, the odds are really against you. Further, I’m just not a travel writer. It has never been my aim. My focus is on things either smaller or larger than what a good travel writer would tell you…or just altogether peripheral.

That being the case, I’m left with disconnected memories and images that together are reminiscent of my time in Elba though they never found a home here. And I’m going to give them one now.

Several days ago, I blogged about the zaftig girls being featured in this month’s issue of Vogue Italia. Those lovely, Botero-esque women made it easier for me to make daily appearances in my bikini, but they also inspired a discussion with my husband—who is still after years working valiantly on my vocabulary—about the lovely Italian word, pannosa. Pannosa literally means “creamy,” and is used to describe girls of exactly that nature. Generous of body, simultaneously light and heavy, rich, abundant, desirable. And my mind connected the sweet new verbal acquisition with my absolute FAVORITE thing to eat on the Island of Elba: granita al caffè con panna—preferably—sotto e sopra. Coffee granita with whipped cream under and over. Yes, this is a moment for expletives and euphoria, for misplaced religious experiences and deep, dark cravings.

In the image above, you see two of these beautiful concoctions, without their “under” cream. (Unfortunately, I forgot to specify.) These nearly-frozen vices are available all over Italy at any gelateria that happens to be offering coffee granita at the time (the most common flavor is lemon), but the best I have ever had in my life is at Zero Gradi in Elba. (A granita, if you’ve never had one, is the sublime Italian version of a snow cone—a sugary, naturally flavored syrup, brought to freezing, but constantly mixed to keep it in an eternal state of ice-y, crystalline, liquidity. 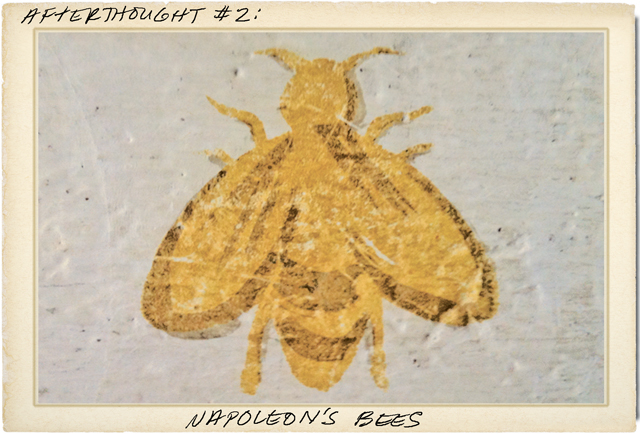 One of the first things that struck me about Napoleon’s country villa was the iconography peppered about. The entry gate is decorated with symbols that the modern eye sees as Fascist (the bundle of sticks and the eagle) which were actually, in Napoleon’s time, borrowed from the Roman’s. But my favorite icon, which is repeated throughout the house (on interior and exterior walls and ceilings), is the bee. Sign of immortality, industry, maybe borrowed from the freemasons, maybe from the Egyptians—who really knows?—graphically lovely bees buzz everywhere in this emperor’s personal spaces. Here, above, you see one of the hundreds of bees frescoed on the tea room wall.

There is really nothing to add here. The island is full of beautiful signage and typography. So for those of us who are turned on by fonts you don’t see anymore, and beautiful design thrown around graciously for the sheer sake of beauty, this is a paradise. It is always a stunning feature of Italy: even when you are in places that are off the beaten path and out of the international spotlight, beauty reigns supreme. It matters here—like air itself. 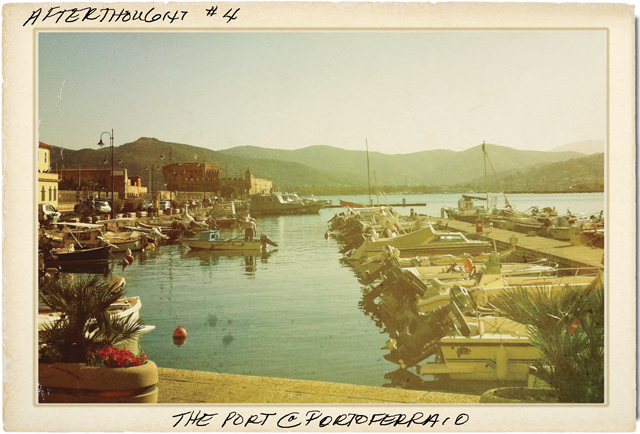 I’m a sucker for a port, any port. I can’t take my eyes away from the massive cranes that lift containers onto the ships at Genova. I yearn for Depot Bay, Oregon, that claims to be the smallest harbor in the world. I am drawn to the edgy beat of Marseille. And I love the port of Portoferraio, with its mix of massive yachts, clipper ships and small fishing craft. Ringed by mountains in the distance and by pastel colored buildings along with the old Fort and Napoleon’s “city” villa in the near-ground, this does what all the best ports do: make you feel at once safe and on the edge of the often un-safe unknown.

And how could I leave my writings about Elba without writing about the restaurant that won our hearts and our guts: da Luigi. There are restaurants that excel others in their culinary arts. There are restaurants—and they don’t interest me much—that are designed to impress in every visual detail. And then there are restaurants that, although utterly unfamiliar, make you feel utterly at home. This is one. High above the coast, just tucked into the woody, mountainous interior, clings Luigi’s, an extended patio offering mountain cuisine, grilled meats, chestnuts, wonderful vegetables—all served by the man himself—a sun-touched islander of some years, with the sophistication of those who have seen the world and decided that the best place to be, nonetheless, is exactly where they are. And where he is, my friends, smells of dill, basil, sage, and freshly burned wood. And that’s before you get out of the parking lot.

Goodbye Elba. Until next year.