Dear you (plural), it has been called to my attention by a recent comment I received that blogging—especially this sort of daily blogging—carries risks. Not seismic risks, but small risks of another sort altogether. The first risk is that in the effort to write daily (which is largely a personal, experimental choice) the chances of my not writing well or of not producing anything of consequence are relatively high. I thank ALL of you for being the patient guinea pigs in that experiment.

The second risk is that in choosing explicitly to focus on detail—i.e. small observations—I double that risk. Writing about the perfection of a chocolate egg could potentially lead someone to believe that I am engaged in a laughable pursuit of navel-gazing, or that I don’t give a damn about world hunger, earthquakes, nuclear meltdowns and the tragedy of man’s inhumanity to man, finding instead that sugar glazing is somehow more newsworthy than universal healthcare or other important and debatable topics. I don’t. Quite the opposite.

It’s just that in the midst of global warming, rampant war, and countless superior commentaries on other things that interest me (architecture, design, art and literature), I find it useful to express myself in this way: finding beauty (great or small) where I can, appreciating the human gesture, and observing and describing with openness whatever pulls my spirits up. Sometimes, my comments will be useful to you. Sometimes they won’t. Sometimes they will be laughable failures (I’ve already put a few of my posts on that list).

One could say, I suppose, that in a way, I’ve demonstrated the good and the bad of the Italian plight: As so much in Italy malfunctions, spectacularly compromising the chances for individual success, mobility and achievement—need I say more than the words “Berlusconi,” “mafia,” “corruption” and “hegemony”—we are driven more and more to find our happiness in the beautification of the quotidian, the softening of the social, and the amplification of the small human act of kindness and/or gentility. What has frustrated Italians for centuries has also lead them to make an art out of living that is recognized the world over. Neither this blog nor the chocolate egg is the apotheosis of this achievement, but both, I think, are created in the spirit (and hope) of putting something decent and unharmful into the world.

I hope that’s the spirit in which you take it. And to the person who left the comment (which I did not have the courage to publish): Whether I misunderstood your intent or not, thank you for inspiring me to make this clarification. And now, as I always do on Saturday: Doors closed until Monday. 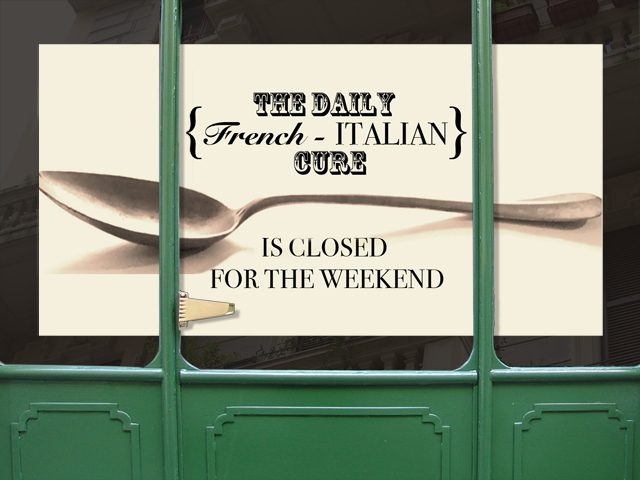 Monday
“Wisteria”
If all the world’s a stage,
this is the most romantic stage prop.
(Read this.)

Tuesday
“All things rubber”
In which we appreciate rubber stores in general,
and Moroni Gomma in particular.
(Read this.)

Wednesday
“Hugs and kisses/abbracci e baci”
In which we notice that there’s
a lot of public snogging going on.
(Read this.)

Friday
“Chicken eggs”
On my love for the annual appearance
of chocolate chicken eggs.
(Read this.)

Like Loading...
This entry was posted in CONFESSIONS, ITALY and tagged risks of blogging. Bookmark the permalink.

8 Responses to Confession #4: The risks involved