I’m afraid I’ve opened the floodgates with “Confessions.” So before returning to milder fare (next stop: focaccia and olive bread in “Taking comfort where you find it”), I’m going to share this—my first confession—with you.

A few years ago, my father died. It was in March, the very month in which he’d been born. Now, with March approaching again, my heart and mind are gearing up for the extra emotional load that seems to fall squarely upon them when the hands of my psychological clock sweep over this familiar time of year and its difficult events undimmed by the passage of time. My dreams of him will intensify, my memories will sweeten. His presence will increase. And I will remember, laughing, how one Sunday afternoon that very Spring, my little family and I scattered his ashes on Lake Como. 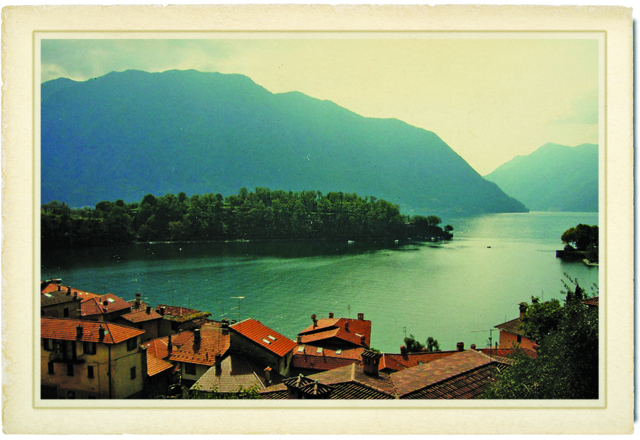 Rewind. My father had always been a timid traveler. He was a British historian, and his trips to England over the years were happy events for him. But I don’t think he’d ever anticipated having a daughter in Italy, a country of dark-haired people with Latin temperaments and—egads—a language that wasn’t the King’s own English. That said, coming to visit me twice a year, which he did religiously, became a mark of his elderly courage and spirit. In his 70’s he overcame his linguistic timidity and traveled here despite it, so strong was the paternal bond and need. The journey seemed to free him. It opened new doors. It gave him better stories to tell when he went home. And, most of all, his lady companions loved coming with him.

One year, when he came alone, before the children were born, we went to Bellagio on the banks of Lake Como for an afternoon. Somewhere on the winding road that day—I can’t say precisely where—we stopped at a bar which was built half on the hill, half overhanging the Lake itself far, far below. The WC, in fact, was in that portion of the ancient structure that vaulted out over the gorge, and the “toilet” was the type that consists of a hole in the floor flanked on both sides by raised, treaded slabs of porcelain, where you plant your feet while squatting above the hole. I don’t know if this real or imagined, but I remember catching a glimpse of the pine trees clinging to that precipitous slope through the small hole, then relieving myself over them, fresh air circulating around my naked haunches. My father did as well, and he emerged from the bathroom with a grin on his face for all the world to see. He had a well-developed scatalogical sense of humor, and this bathroom suited him to a T.

Later, we ate at a restaurant. I don’t remember what we chose, but he probably had spaghetti alle vongole. He loved them. Meals never failed to thrill him here.

I took two pictures of him that day, and in both of them he looks unusually at ease and deeply happy with windblown hair under his jaunty tweed British cap.

Fast-forward to the year he died. My father was cremated, as had been his wish. Most of his ashes were scattered behind the church he attended in Chattanooga, Tennessee. I reserved a portion of them to bring back to Italy with the specific intention of scattering them on Lake Como, the site of that perfect, happy day. I had visions of arriving at a lovely curve by the lake’s side, making my way gently through sweet-smelling underbrush, and casting his ashes upon the silvery waters while murmuring a private prayer of peace.

But as has so often happened when I’ve expected “the romantic” in Italy, things took a dramatically different turn. Half way to Como from Milan, my husband told me simply that spreading ashes wherever you wanted to was illegal in Italy. I was shocked. “What are we going to do?” I asked with a sinking heart. “We’re going to spread them,” he said. “We just have to make sure no one sees us. That’s all.” This typically Italian proposal to work creatively around restrictions both comforted and upset me, but I needed to go with the flow on this one, if I wanted to leave a part of my father in the Lake.

The in-car navigator cheerily conducted us up and down a wildly winding road, at one point heavily trafficked by racing bikes plying tenaciously towards the Madonna of Cyclists (La Madonna del Ghisallo), perched at the top of the mountain. Past the Madonna we flew. Up and down we went, up and down, in and out, now near the Lake, now far from the Lake. But every time we approached the Lake’s edge, one of two things happened. Either it was, in actual fact, much too dangerous to stand at the edge as it was high above the Lake and dropped off sharply, or there were throngs of tourists and the buses that had disgorged them. Again and again, we stopped the car, but we never found the right place to perform our little ceremony in private.

I was losing hope, but my husband had an idea. “We’ll cross the Lake on the ferry, and we can spread the ashes from the boat.” My sense of romance restored, we made our way to the ferry landing in good time, bought our ticket, and got in line to drive onto the massive conveyance. What I had conveniently forgotten, however, was that ferry boats aren’t constructed for the poetic broadcasting of ashes. They are built for function and safety. Being a beautiful day, the upper decks were crowded with tourists. (There would be no ash-tossing from there.) And the parking level, where we were, was being regularly patrolled by ferry staff. Not to mention the fact, that in the narrow space between our parked car and the walls of the ferry, there were no vast open spaces for viewing the lake, just the occasional porthole or narrow opening to allow for ventilation.

In the end, I distributed the ashes between myself, and my children, and like mad people intent on committing a petty crime under the radar, we jabbed (scattering would have been too slow a process) my fathers ashes in great unceremonious fistfuls toward the lake, through the portholes, every time the coast was clear. The wind blew many of them back towards the boat. Others made it into the water. But even after this vigorous, coordinated attack, when we’d reached the other side of the lake, I still had ashes in my possession.

There’d been no prayer, no thoughtful words, no time to watch the ashes waft toward and become one with a pearlescent surface of the famous Lake Como. No. Bone bit and biological material had just been thrust into the air, either to end up back on the boat or at the dark, weedy bottom of a lake. Fish food. And yet, and yet—

We were giddy with happiness. We’d broken the law. Many of my father’s ashes were in Lake Como. It had been—yes—it had been very fun and funny. And, most of all, my Dad would have loved it.

With light hearts, we went to eat at a lovely restaurant perched picturesquely above the Lake. The food was delicious. The wine was light. The lake sparkled like a jewel. After coffee, I went to the bathroom, carrying my father’s ashes with me. Then I returned to the table, we payed our bill, and we headed home.

Back in Milan I realized that I’d left my father’s ashes in the bathroom of the restaurant. This final indignity was even more perfect than the previous one. He would have been perfectly happy spending the night in such a place, and the well-rounded comedy of the day would have deeply satisfied his sense of the ridiculous and the ironic. We went back the next weekend and retrieved what was left of his ashes.

They are still in the desk drawer next to me, in a plain manilla envelope from the funeral home.

8 Responses to Confession #1: My father’s ashes