Confession #7: Hands across the water

I’m not Catholic, and I regard one’s beliefs as highly private despite the trend in American political elections, so this post isn’t about religion per se. It’s about what one religious icon says to me, over and over again, as I pass it on my summer meanderings…

In our small Burgundy town, near the bridge over the canal and the river (the Cure, after which this blog is named), there’s a small house about the size of a telephone booth. It faces the water, calling no attention to itself. Inside, behind a locked gate, is the figure of St. Nicholas in the act of saving a life. I have contemplated this figure many times. The local paper is full of harrowing tales of deaths and near misses involving the rivers and canals that cross the countryside (and, I suspect, wine consumption), so I’m sure this little fellow has more work than he can handle.

But it’s not the particulars of St. Nicholas or water safety that interest me. It’s the symbol itself of one hand reaching to another. And the presence of water. Half of my adult life has now been spent living overseas, so separation and distance are defining features of it. This would not be the first time I’d commented about missing people, if “missing” (the word being a gross understatement) were my subject. No. It’s the being “connected” part that I’m thinking of now. 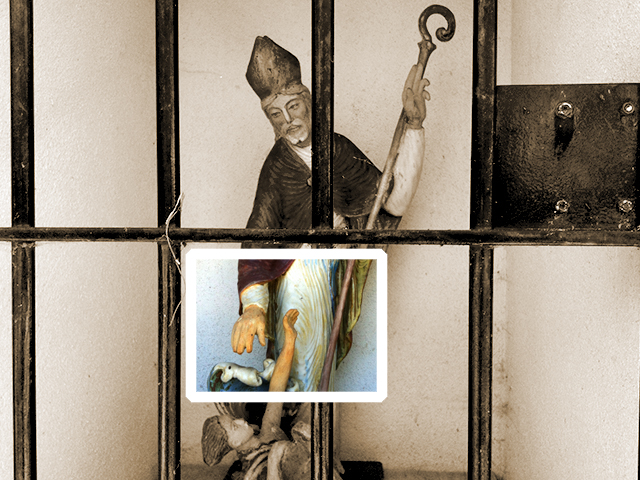 I have many friends in difficulty right this minute. I don’t know if it’s our age. Or our Times. Or just the way Life is. I suspect it’s all of the above. But we need each other like never before. And as my grandmother used to say, and she meant it, “I may not be with you in body, but I am with you in spirit. Don’t think I’m not.” Her hand was always reaching out to mine even when, in a physical sense, it couldn’t. This is what our hands do. Metaphorically, of course. But sometimes the metaphor is as strong as the reality. And sometimes, even when we can’t be there, the reaching is necessary.

And so to my friends to whom I am so deeply connected and who may find themselves overwhelmed and drowning, my hand with all its human limitations and not one ounce of saintliness, is reaching across the water.

Like Loading...
This entry was posted in CONFESSIONS and tagged France, hands, icons, saint nicholas, saints, the cure, water. Bookmark the permalink.

4 Responses to Confession #7: Hands across the water