Which is better—the yoghurt or the pot?

High on the list of things that banish depression is yoghurt pots. Every summer we splurge on La Fermière yoghurt just to bring home more terra cotta jars. There are a variety of colors depending on the flavor of the yoghurt—blue for vanilla, natural color for unflavored. Inevitably you see them lying about people’s houses, used as containers for those pieces and parts that never belong anywhere else, small vases, or—as is the case chez nous—coffee cups. They are exactly the right size to be cupped in one hand or two, and precisely the right density to warm your hands without burning them. But sometimes, they serve no purpose at all and are just there, because they are so pleasing to the eye.

This is to say nothing of the yoghurt itself which is easily some of the best I’ve ever eaten. Were I an overwrought food critic, the word “sublime” might slip in here somewhere, especially in reference to the vanilla. Or would that be a misplaced response to the loveliness of the blue? I think this is a case of the chicken and the egg. Impossible to say which comes first in a friendly debate about causality or the inherent goodness of things. 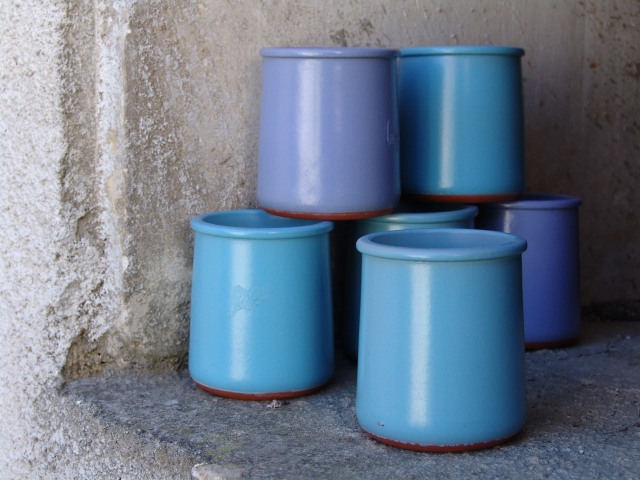 38 Responses to Which is better—the yoghurt or the pot?